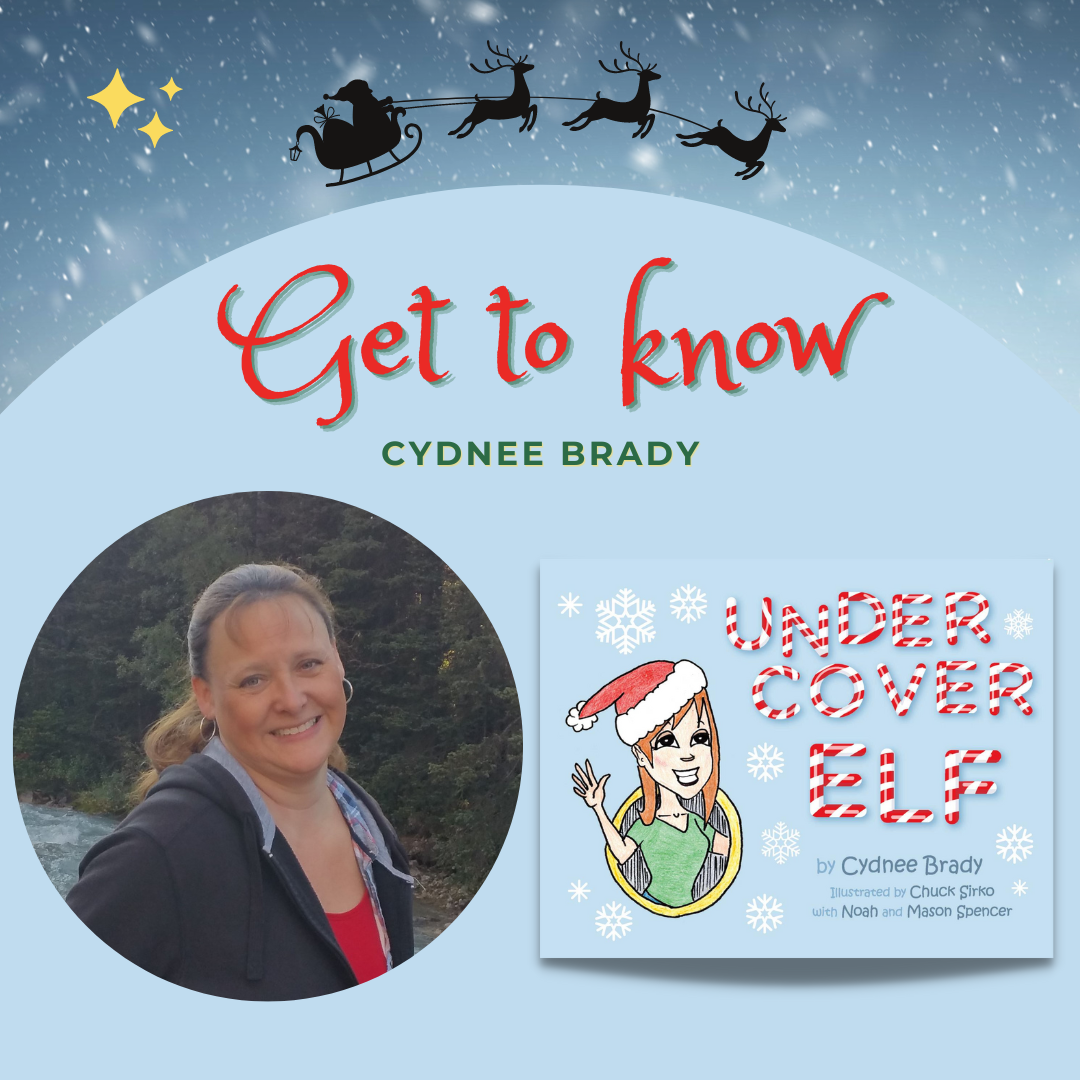 Cydnee Brady is the author of the new Christmas children’s book, Undercover Elf. It’s a creative and charming story for families to enjoy this Christmas season, and many more in the future. With its wonderful storytelling and hand-crafted illustrations, this festive book captures the magic and joy of Christmas.

In the story, you meet a mom who might look like other moms – but she has a very unique job. Her boss is Santa Claus, and she is tasked with numerous responsibilities that support his holly jolly work. Some of this includes scoping out which houses have chimneys, taking note of noisy dogs that could potentially bark at the intruder in the big red suit, and of course, working on the Naughty and Nice list.

Christmas has always been my favorite holiday. So, reading this story was a joy that brought me back in time. It made me think about that limitless sense of wonder I once had as a child every Christmas. I thought about my belief in magic and those Christmas Eve nights I stood outside – scanning the dark sky, just to get a glimpse of Santa’s sleigh. It might have been an airplane, but in those moments, I knew it was a magic sleigh soaring through the skies.

Christmas – and the entire holiday season – is such a beautiful time for families. Because of its inherent nature of being a time filled with love, joy, and wonder, it is the perfect theme for children’s literature. Now, breaking into this genre is no easy feat, as some of the most cherished children’s stories of all time are Christmas-themed. But I believe that the work Cydnee Brady did to create Undercover Elf positions her to become a household name in children’s fiction – as she delivers on all fronts in her book.

When reading the book, I was overjoyed as I witnessed its ability to spark that sense of wonder in the minds of early readers. Just imagine, a world where the magic of Christmas lives among us. Oh, the possibility of Santa’s elves living normal lives – but supporting the North Pole’s biggest needs! As an adult reader, it’s such a delight to know that this story will help future generations continue to believe in Christmas and its magic, just like me.

Cydnee Brady was kind enough to take some time to answer questions about herself and the book. Read along to learn more about her and Undercover Elf.

Joe: Is Undercover Elf your first children’s book? If not, what are your other works?

Cydnee: Yes, this is my first book. When I was ten, I wrote a mystery story based on Nancy Drew, which was my favorite book series growing up. I’ve also written a few poems. My master’s thesis was my first published work, but that would not interest children at all! It was on IT system implementations – probably a good thing to read if you have insomnia!

Joe: So, what inspired you to write a Christmas book?

Cydnee: The book really came along by accident. I have always had a “pixie ear,” as my mom calls it – round at the top, but a point on the inside. Sometimes she would call it an “elf ear.”

When my daughter was five, we were watching a movie and it had an elf with the normal-looking ears, and I just made a comment that I was a secret elf because of my ear, which I showed to her. I didn’t really think much more of it, until the next month when her brother was born – the first time she saw him, she started to cry! He had an “elf ear” and she didn’t! I had no idea that she had taken the story so seriously until then.

From that point on, Undercover Elf became part of our household. Each part of the book comes from something that we added to the story due to an event or a question our kids asked when they were trying to find out if Santa (or me, as an elf) were “real.” My favorite one was when my son asked how my husband and I got married if he was human and I was an elf. He was five, and very smug, because he knew that he had me caught this time! I just looked at him and said we filled out a LOT of paperwork. His little face just fell, and he said, “Oh, ok,” and completely accepted it. The whole story has been so much fun.

But, to get back to the question, I have told many people over the years about the elf legend in our house, and everyone has said that I should put it into a book.  So, here it is twenty-five years after it all began!

Joe: What are some of your favorite Christmas stories? Were you inspired by any of them when writing Undercover Elf?

Cydnee: My favorite Christmas story has to be A Charlie Brown Christmas. I am a big Snoopy/Peanuts fan, and I love Linus’ speech, and the realization that love is what Christmas is all about. My least favorite story, or movie, at least, is Rudolph the red nosed Reindeer (ironic for an elf, right?) The island of the misfit toys always makes me cry – I would love to take them all in and make them feel loved!

Joe: How long did it take you to write this book?

Cydnee: Well, in some ways it took over twenty-five years! But it is really hard to say how long because there were a lot of starts and stops. Once I got in the right spot, it went pretty quickly.

Joe: Were there any challenges you faced during the writing process?

Cydnee: One challenge that I faced was getting the voice right. Once I got that figured out and was able to write in the voice I wanted, it flowed pretty easily.

The biggest challenge I faced, to be completely honest, was my own fear of the unknown, and also the fear of rejection. Could I even do this? What if no one likes it? It is scary to put yourself out there to the world.

Joe: Is there any main message that you hope readers take away from your book?

Cydnee: I would like for readers – both parents and children – to remember that there is a magic in Santa and Christmas. We all seem to be kinder and more generous during this time of the year, our humanity seems to shine more brightly.

I would like for children to also realize that there is more to Santa than just gifts showing up. There are a lot of steps that have to work together to make it all work out. Being able to look out for Undercover Elves throughout the year will hopefully help keep the magic of Christmas alive in their hearts all.

For parents, I also hope that they will be able to talk to their children about the magic of Christmas, but hopefully also be able to have discussions about how it takes teams and processes to get things done, for example, how does the food get to the grocery store?

Joe: What themes do you think are necessary for a good Christmas story?

Cydnee: For me, a good Christmas story should revolve around love, kindness and giving.

Joe: Have you heard any early responses yet from readers?

Cydnee: Yes, I have had some very positive feedback from readers! The responses have mentioned the story is fun and whimsical, and that you can feel the child’s excitement. It has been wonderful to get valuable feedback from reviewers, and I have been especially happy when the reviewer leaves a comment on the illustrations and the way we did them. The words are only one part of the story, but when Chuck Sirko (the illustrator) drew the black-and white drawings for the book, he really gave Undercover Elf her true identity and made her real.

Once of my best responses was from a person who had a beta version of the book I did before I came to BookBaby. He said he wished he didn’t have a copy of the book because his daughter had him read the book to her EVERY NIGHT! I thought that was really great! And now the book looks so much better, he would have to read it twice every night!

Joe: Did you learn anything about yourself when writing this book?

Cydnee: Definitely – it has been a fun experience, honestly. I never realized that there was so much that goes into publishing a book and selling it, and I have learned to just take a chance and go for it.

Joe: Do you have any advice for similar authors in your shoes who want to publish a children’s story – particularly a Christmas themed story?

Cydnee: Take a deep breath, and then go for it. Have a group of people that you trust to give you realistic and constructive feedback, as well as people who can help you stay on the right track. Also, plan your promotion activities long before you plan to launch the book! I had no idea!

Joe: Are you working on any new projects?

Cydnee: Once the holidays are over, I am thinking of adding another story or two, and making this a series. My grandsons seem to think that Undercover Elf could be called into service to help out the Tooth Fairy or the Easter Bunny!

Joe: Are you on social media? If so, what platforms and what are your handles?

Cydnee: Facebook is as far as I have gotten with social media. I have a website where I’ll be adding reviews, comments, and events, etc. I realize that I’ll have to join the 21st century soon, but sometimes the North Pole still does things old-school.

Be sure to support Cydnee Brady and other independent authors sharing the magic of Christmas this season by purchasing their titles on BookBaby Bookshop – where authors earn the highest royalty rates in the industry.