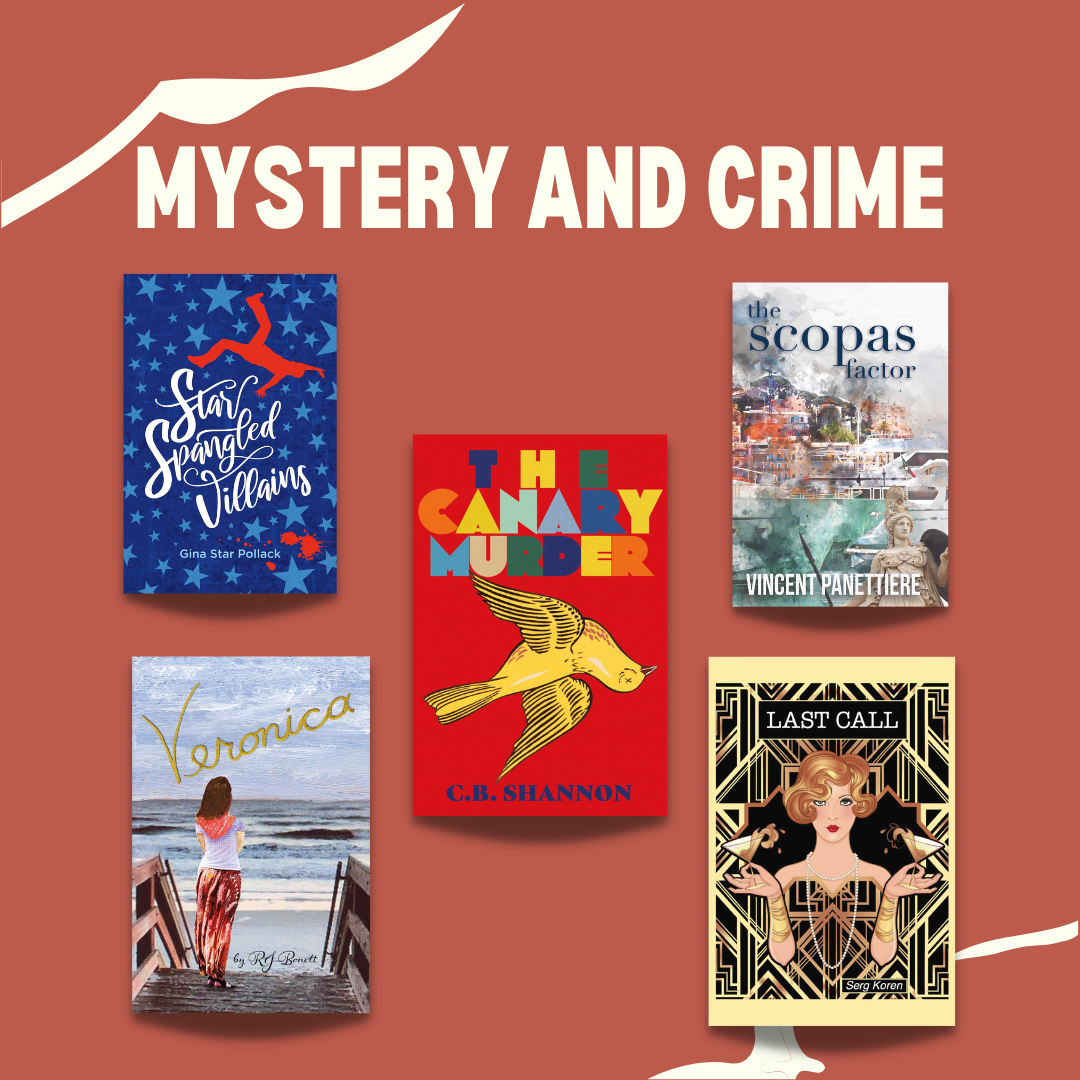 Murder, mystery, and intrigue that keep you glued to each page – there’s nothing better than crime fiction. If you’re looking for a new mystery or crime novel, check out this list. With captivating plots and unpredictable storylines filled with deceit and deception, these books are not to be missed.

Star Spangled Villains is a Readers’ Favorite five star recipient and is a perfect read for those interested in both mystery and satire. Author Gina Star Pollack does an excellent job crafting this multi-dimensional thriller that is jam packed with conundrums and political suspense.

In the book, President-elect Paul Bulgrando makes the bold decision to move the ceremonial inaugural events to Hearst Castle in California. But instead of celebration, he is assailed with skeletons, arson, murder, blackmail, and a crippling family secret. This clever novel is filled with irony and unexpected twists. It is a scathing political allegory of vanity, deceit, and murder, and I couldn’t get enough of it. The writing is prolific and witty – filled with dark humor and genuine thrill. I recommend this book to anyone – especially crime readers who enjoy political thrillers.

The Canary Murder by C.B. Shannon

The Canary Murder is a chilling thrill ride that you won’t be able to put down. In the novel, it has been decades since twenty-six-year-old Lizzie Lancaster was brutally murdered, and it still doesn’t make sense. The kidnappers killed her before collecting the ransom. The mastermind behind the murder took the money, and then his own life. His accomplice took a plea deal, and law enforcement took a bribe. But worst of all, Lizzie suffered the cruel death in Mississippi.

Years later living in Florida, protagonist Beth Grant finds herself back in Mississippi for work – and has a chance encounter with Lizzie’s husband, Dwayne. Her interest in the case is once again ignited as her suspicion grows. With the help of an eccentric employee, she launches her own investigation and unveils mysteries and corruption that go far beyond what she ever imagined. Risking everything – Beth pursues the truth.

The Canary Murder is an outstanding literary triumph, and you would be hard pressed to find a more compelling mystery than this book.

This fascinating mystery novel takes you to Long Beach Island, New Jersey, in the 1970s. For reporter Ron Bennett, long walks on the beach typically bring him much needed tranquility. His high stress Philadelphia reporting job often requires him to cover stories that expose tragedy, corruption, or both. So, when he makes that 60-mile drive to the shore, he typically is in his place of comfort.

But not this time. On one of his walks, he stumbles across a dead body in the sand. Racing to find a phone to call the police, he meets a woman named Veronica. A chance encounter leads to a growing interest – and a tumultuous battle to get her to leave her abusive husband. Ron soon finds himself involved in a situation that would make the worst story he ever covered pale in comparison.

The novel will send shivers down your spine as Ron slowly uncovers that young women are being murdered, but so much mystery remains. A trip to the beach is peaceful no more, and uncovering the secret is all that matters. This stirring story will keep you on the edge until the very end.

Serg Koren’s novel, Last Call, is a can’t-miss classic that should be on your bookshelf. It’s the perfect novel for readers who enjoy detective, mystery, and noir themes in fiction.

As the book begins, the protagonist finds himself floating in the Anacostia River, just outside of Washington D.C. Unsure how he got there, his only memory involves a mysterious ring and a dame. Now, all he has to do is figure out why someone tried to kill him over a small-time art show. No problem, right?

Along the way, he encounters bootleggers, corruption, and a fiercely dangerous ensemble of characters. Last Call offers a unique twist to noir and it is filled with intriguing elements and characters. Serg Koren is a phenomenal fiction writer, and this novel certainly did not disappoint. If you are interested in his work, also check out his recent novel, Scavenger Hunt.

The Scopas Factor by Vincent Panettiere

Vincent Panettiere is the dynamic author of several novels – including Shared Sorrows, The Music of Women, and Woman to Blame. In The Scopas Factor, he once again delivers a magnificent tale that is riveting from beginning to end.

In the book, Detective Mike Hegan is run down, burnt out, and ready to walk away from his career. After his last investigation ends in tragedy, he returns to Chicago ready to put the past behind him. His girlfriend, Diana, has other plans. He has no interest in taking the job she proposes to him – but of course, he’d love to make her happy. As he arrives in a small California town to take on the job, he finds himself in the crossroads of a kidnapping and two murders. A visit to Diana’s family in San Francisco only deepens the mystery. When her father disappears, Mike takes off for southern France, where he discovers that the mystery has only just begun.

The novel is filled with secrets and a well structured plot that will have you thinking through every possible option until the very end. I strongly suggest you read this book – along with Panettiere’s other works. He’s a visionary writer and his stories are all relevant, thought-provoking, and memorable.

Explore our entire library of mystery and crime novels on BookBaby Bookshop! Stay tuned for additional genre-specific lists and don’t forget to sign up for our weekly newsletter. You will never miss out on a good book when you are a part of our reading community.