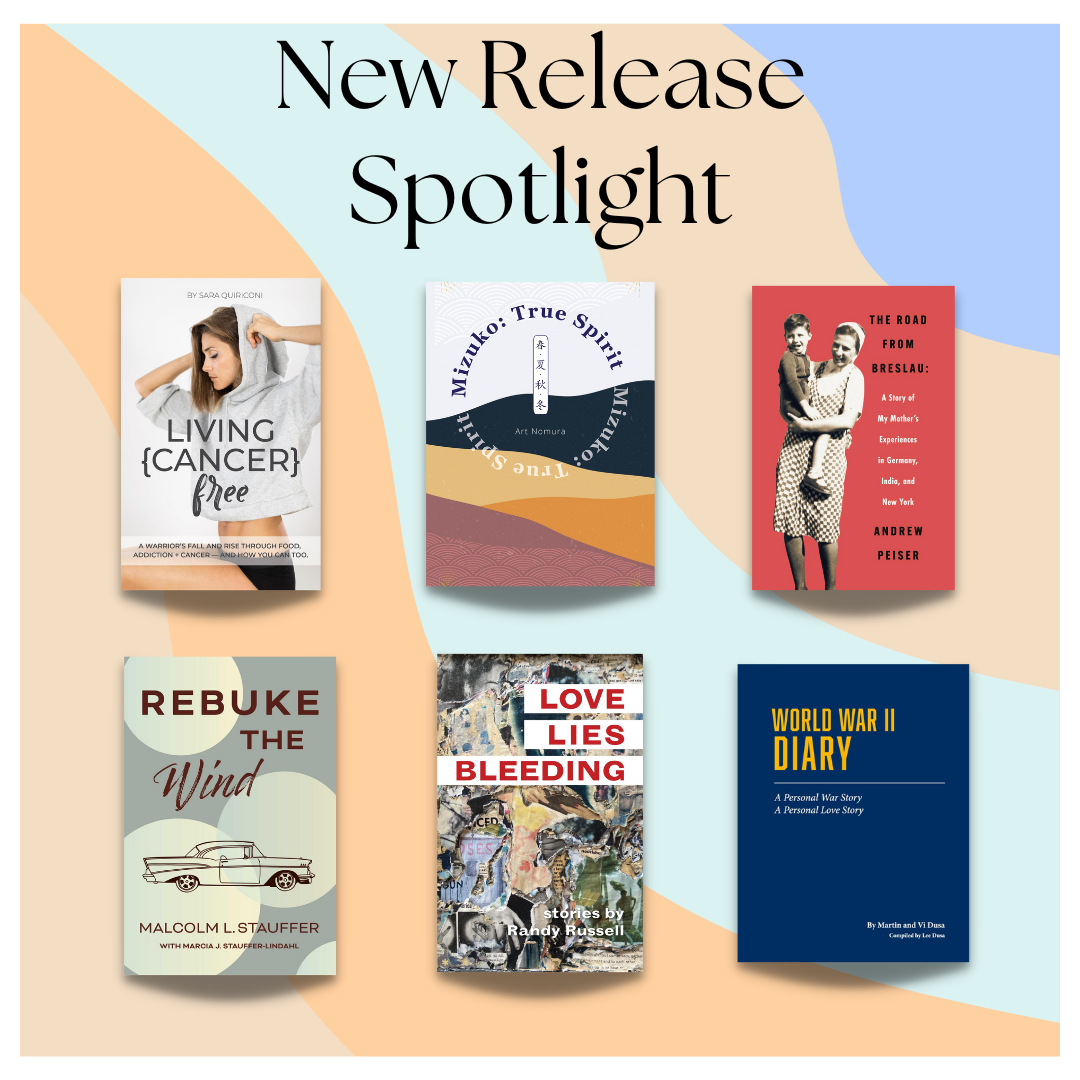 New book alert! Actually make that six new books… Check out the newest and hottest books on our storefront. You’ll find yourself inspired by a cancer survivor’s story. You’ll be touched by a true story of love amidst darkness during World War II. This curated selection is filled with instant hits that will keep you coming back for more.

Sara Quiriconi’s book will impact your life in so many ways. Living {Cancer} Free is a multi-part autobiography of a cancer survivor. But the book is so much more than that. Beyond lymphoma, Sara also shares her story overcoming real-life “cancerous” struggles with anorexia, bulimia, alcohol addiction, divorce, PTSD, unfulfilling jobs, and more. In her powerful book, Sara reminds readers that you need the strength and courage of a warrior to become a survivor. Yes, this book is the perfect companion for cancer survivors and patients. But it also is a must-read for anyone who is seeking to overcome their own “cancers” and darkness. The book is compelling from start to finish, and transforms the lives of those who read it. Can you honestly say that your life is free from struggle? Do you ever feel stuck? Most of us feel this way. At times, it seems like life and suffering are eternally associated with each other. But that does not have to be the case. No matter your background, Sara’s book will empower you to awaken to a new life. It will awaken you to freedom with newfound satisfaction and tranquility. This triumphant warrior’s story will help you become the highest version of yourself. You can follow Sara on Instagram and learn more on her website.

There are sadly very few World War II Veterans remaining to tell their stories of triumph, tragedy, and all that remains in between. Storytelling is what keeps history alive, and this book does an extraordinary job of using stories to bring the past back to life. World War II Diary is exactly what the title describes – it was created by the author’s mother, Vi Dusa, on December 7th, 1941. On that infamous day, everyone in the United States learned the devastating news that they would be going to war after a horrific attack on Pearl Harbor. Life would never be the same from this moment on – and the best way to capture the gravity of that moment is by learning from those who were directly impacted. This valuable book shares a couple’s story living through those fearful days. It is a book about the fear of war. It is also a book about love and patriotism. Vi and Martin Dusa did everything possible to do the right thing during a time when evil swirled the skies like a cool breeze. This multi-dimensional story will appeal to history buffs, proud patriots, and those with a soft spot for love stories.

The Road From Breslau: A Story of My Mother’s Experiences in Germany, India, and New York by Andrew Peiser

Imagine living your childhood during World War I. Imagine witnessing your husband get taken away to a concentration camp during Kristallnacht. Beyond that, imagine living through India gaining its independence from Britain in 1947 and experiencing the riots after Gandhi’s assassination. This was Marianne’s life. The Road From Breslau is the powerful true story of an incredible woman’s life. Written by her son, Andrew Peiser, the book shares fascinating insight into some of the most tumultuous years of recent history. Beyond being filled with rich historical details, it is a story of resilience. Living through immense adversity, Marianne was never bitter. She remained strong and courageous, always adapting to situations although life took her across the globe and through hardship’s fires. Most people would crumble in the circumstances she faced, but it all had the opposite effect on Marianne. She stood strong and came out to the other side with a one-of-a-kind perspective on life. From Germany, to India, and then to New York, Marianne lived a life like no other. Perfectly written, the book captures every aspect of her inspiring years.

I love a good rags to riches story – that’s why this book fascinated me; as it is the exact opposite. Mizuko is the compelling true story of Mizuko Takahashi, who went from riches to rags. Once one of western Japan’s wealthiest families, the Takahashi’s lost everything in 1900. This left five-year-old Mizuko with nothing as her family relocated to the United States of America. Throughout the book, readers get an in-depth look into the life of an Asian immigrant during the 20th century. It’s a story of one woman’s efforts to overcome racism, sexism, and poverty. It’s a necessary read if you are seeking a better understanding of immigrant life, the history of minority women in America, and the controversial incarceration of Japanese people in America during World War II. It does an excellent job of sharing another side of American history – one that is less frequently taught and discussed. It will be extremely appealing to those interested in history, immigration and immigrant lives, women’s issues, biographies, combatting racism, WWII American Internment Camps, and Japanese American History.

Randy Russell is a prolific author who once again delivers in his new book. His previous publications, Black Iris and The Doughnuts are both must-reads. Love, Lies, Bleeding is in the same tier of literary excellence. The book consists of eleven stories that are bonded together by one central theme – love. Although each story is different, there is an interconnection amongst them. Through the stories, the author seeks to answer this big question: love – what is it? Why do we obsess over it? Is it worth it? Can we live without it? Is it actually essential? I love Randy Russell’s pursuit to both understand and question love. It’s something that we all feel, but do we ever really think about what it means to love? The book tackles rather profound concepts in an approachable way. Each story is so thoughtful and filled with fascinating characters. If you’re interested in fiction, philosophy, or just the idea of love, check this book out.

Taking place in the 1960s, Rebuke the Wind introduces you to a carefree high school graduate. When you are eighteen, the world is filled with possibility, and death is a concept too distant to fear. But that all changes when he receives the devastating news that his kidneys are in chronic failure. During this time, life-saving kidney dialysis was not available to all who needed it. The book takes you through his tumultuous journey through the unknown as he fights for his life and his faith. It’s a powerful voyage through the 1960s, rich with detail and emotion. Originally written in 1980, the author refused to finish writing – maybe because the story was too closely associated with his own experiences. Several years after his death in 2008, his widow collected the chapters and finished the book. Rebuke the Wind does an extraordinary job recounting and the history of the 1960s, Central Illinois, and the story behind dialysis.

Have you signed up for our newsletter yet? Never miss out on a great book! Fill in your email address on the sidebar to receive our weekly mailings. Happy reading!