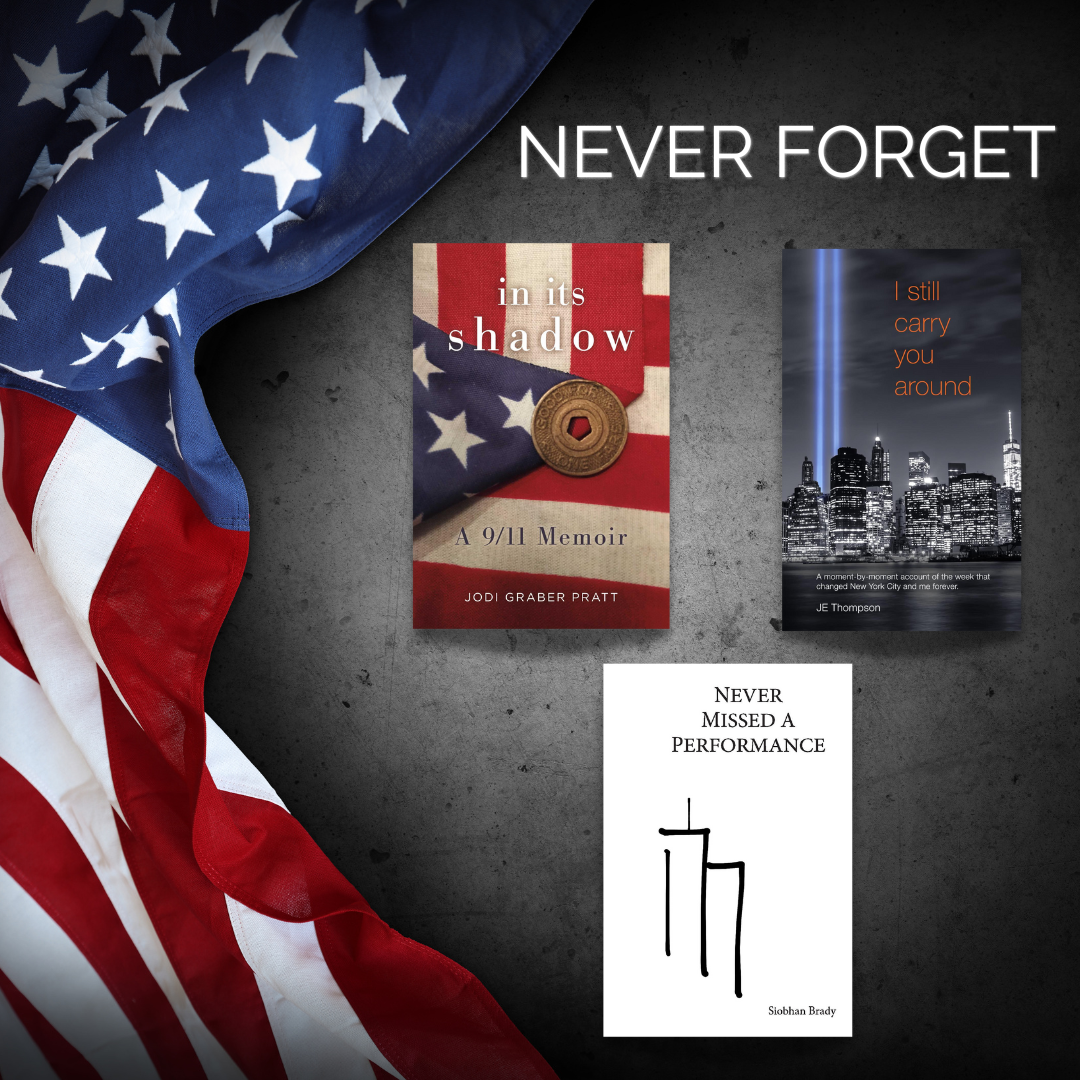 Sunday marks 21 years since the horrific attacks on the World Trade Center. Thousands of lives were lost, and our nation was forever changed. Despite the years gone by, we are still healing. We will never forget the horrors of that day, and we will always remember the heroism of those who went into the rubble and fire to save others. Check out these three books that share stories from that terror-filled day, and memorialize the thousands of lives lost.

I Still Carry You Around by JE Thompson

I Still Carry You Around takes you on a breathtaking journey through a city in crisis immediately after the attacks on the World Trade Center. Author JE Thompson is a born and bred New Yorker, and her unforgettable book shows you what it was like to be in the city during those harrowing days.

You will join her as she walks the streets, wanders the island, volunteers at the Armory, and navigates through Ground Zero. I was blown away by her ability to share the little details from that week. Experiences can only be truly understood if you were there – if you lived it. And before going to sleep each night, Thompson would document everything that surrounded her – the chaos, and the humanity. Sometimes, during our darkest moments, the most beautiful aspects of the human spirit are revealed.

The autobiography is about a suffering city – but it is also about the strength of its people. It tells the story of their resilience, selflessness, and courage to come together and rebuild from the rubble. Writing a story like this can be exhausting. In fact, Thompson buried the story for 20 years. The wound was still too fresh to read it, even after all that time. But last year, despite it still being a challenge, the manuscript was unearthed, and she shared her experiences. Now, 21 years later, her book is as important to read. I Still Carry You Around is a magnificent work non-fiction that should be read by all Americans seeking to see through the eyes of a New Yorker on September 11th, 2001.

Never Missed A Performance truly embraces the motto – never forget. Author Siobhan Brady is the daughter of a New York City firefighter. She always felt a sense of great pride with that, but after the attacks on the World Trade Center on 9/11, her awe for the profession increased. Her book shares the powerful stories that remind us of the honor associated with being a firefighter.

The author was only 11 years old when the planes struck the towers. In her book, she discusses all she witnessed – the uncontrollable sobbing from her mother, the pain and fear in everyone’s eyes, and the inexplicable terror that filled the city. So young at the time, it was difficult for her to process and comprehend it all. But that is the blessing and curse of time – it allows us to think and conceptualize what once was incomprehensible.

The numbers, for example, could be so hard to grasp – 2,996 lives lost. But even as a child, Siobhan very much understood that her father belonged to a heroic group. Members of Engine 54, Ladder 4, and Battalion 9 were men and women who put their lives on the line on September 11th. Fifteen of them went to work, and never came home. This book was written for them, and the many others who died in the line of duty.

You gain both a beautiful and heartbreaking perspective from reading this book. While growing up, Siobhan learned so many of her life skills from sitting at the firehouse kitchen table. And then years after the attacks, she’s been processing and healing after all that occurred. Writing, in a way, can be therapeutic, and this book shares the rich insight she gained from observing these brave men and women. It’s a transfixing work that honors those who sacrificed everything and quite literally – went headfirst into the fire to protect us.

In Its Shadow: A 9/11 Memoir by Jodi Graber Pratt

At 8:43 a.m., it was unthinkable. Three minutes later, it was reality.

This incredible memoir received the 2020 Readers’ Favorite International Book Bronze Medal in Government/Politics, and for good reason. There are not many books like it. In Its Shadow allows you to see through the eyes of someone who started her morning like normal on that fateful day – by showing up to work in the World Trade Center.

For businesswoman Jodi Graber Pratt, September 11, 2001, began as normal. And then, she felt the air pressure increase over her head. Soon, the North Tower was ripped open by the first of two planes that would crash into the World Trade Center. This moment changed everything, and Jodi lived it. She ran for her life and avoided falling debris. She soon found herself imprisoned within the city for several excruciating days, living in an alternate United States.

Her book reflects on the abrupt change that occurred after the attacks. Everything we once took for granted was brought into question. In this new America, assumptions about security, safety, and freedom were suspended, and despair reigned. Jodi found herself rethinking her privileges and responsibilities as an American, and sought to find answers to important questions like – how to return America’s focus to its traditional values, ideals, and democracy. Beyond that, she asks how and when could we find the right people to build the necessary government that will protect its people?

I was captivated by each page of her book. The details of that fateful day are both haunting and moving. The author’s ability to share her mental thought processes during such horrific moments was superb. This is the 9/11 memoir to read. I hope you take the time to check it out, you won’t regret it.