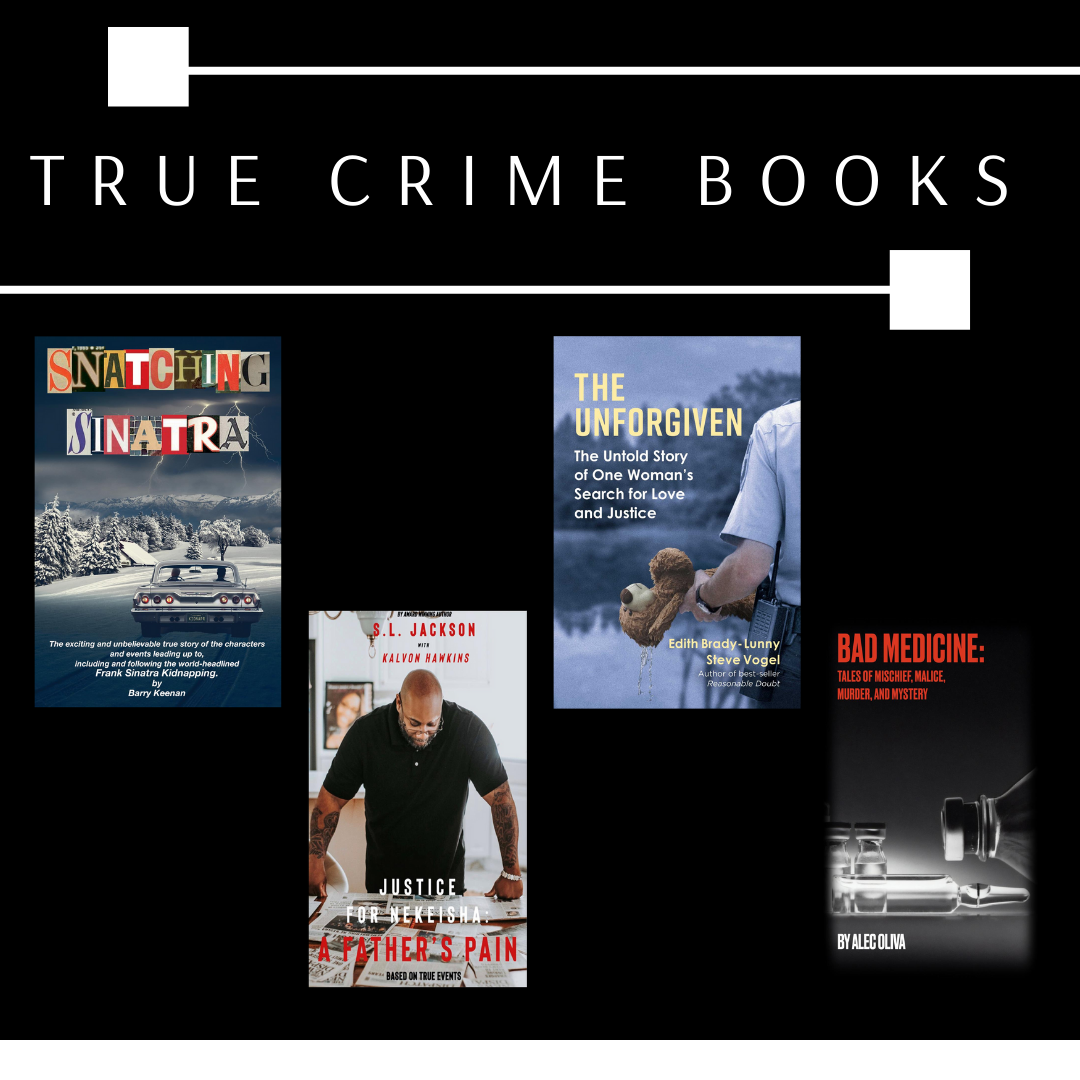 True Crime is a fascinating genre. These complex stories allow us to examine humanity’s darkness from a distance – and think closely about how and why people could commit such horrid acts. We have a natural desire to solve mysteries and seek answers to the most daunting questions. True Crime allows us to do just that. If you’re a True Crime fan, check out some of these books on BookBaby Bookshop. Sometimes heartbreaking, but always compelling, these are absorbing books that will tickle your psyche.

This is a remarkably unique book – even by True Crime’s standards. Unlike other books in the genre, it’s written by the man who committed the crime. The author is Barry Keenan, and he is famous for Kidnapping Frank Sinatra Jr. in 1963. His story is one of crime, mental illness, and gangster glamour.

From the perspective of the mastermind behind the crime, Snatching Sinatra takes you on a journey through the characters and events leading up to the infamous kidnapping. You might wonder, how did an upper middle-class kid come to believe that he had God’s blessing to kidnap Frank Sinatra’s son? Well, after a car accident, Barry Keenen found himself pill-addicted and penniless. As he spiraled down a dark path, he thought he received a vision from God – instructing him to kidnap Frank Sinatra Jr. for ransom.

Fascinatingly, there were rules to be followed. No one could be injured, and he would have to pay the ransom money back. I was absolutely fascinated by this story – layer by layer you come to understand what went on inside Keenan’s mind and his motives behind the crime. After he was convicted, Barry was sentenced to life plus seventy-five years in prison. However, he only served four and a half years because he was legally insane at the time.

Everything is more complicated than it appears. Beyond the surface, Barry struggled mightily from mental illness. He passed away in November 2022. He spent the last decade of his life working on this book. Barry wanted to tell his story to help others who struggle from debilitating mental illness get the help they need.

Justice for Nekeisha: A Father’s Pain by Kalvon Hawkins and S.L Jackson

Justice for Nekeisha: A Father’s Pain will break your heart as it expresses what it means to feel pain in the truest, most cruel manner. This True Crime book tells Kalvon Hawkins’ story and the tragedy of losing his teenage daughter, Nekeisha.

Losing a child is every parent’s worst nightmare. When that nightmare becomes real life, you are left with indescribable agony and countless questions. After Kalvon lost Nakeisha, he sought answers and justice. Along the way, he encountered gut-wrenching police corruption, no closure, and no peace. But he never gave up.

This book takes you through Kalvon’s tragic journey fighting for justice. Beyond its heartbreak, you come to understand how infuriating it can be to pursue justice. A corrupt and broken system allowed the killer to walk free for years. Throughout this book, you’ll look into Kalvon’s soul and understand his profound sadness, anger, and grief – especially while being targeted and threatened by law enforcement. You’ll be moved to tears as you truly feel a father’s sorrow, and the immeasurable love for his lost daughter.

You will feel every word of this book and understand the importance of seeking justice and closure. It’s an emotional rollercoaster that shows how far one man is willing to go during life’s darkest hour. In the end, despite misconduct, faulty witness accounts, and depression, Kalvon made sure Nakeisha would not become another statistic.

When we put our lives into the hands of healthcare providers, we do so in the most vulnerable state. We trust them to take care of us, provide the best possible care, and strictly abide by all practices that keep us safe. Most medical professionals do it the right way and have our best interests in mind. However, there are a few who are driven by dark motives and immorality. This chilling book shares stories of immoral healthcare providers – and the devastating effects that result from their practices.

Author Alec Olivia thoughtfully writes, “[o]ur societal alter-casting, while benign and justifiable in many cases, can make us blind to the human nature of those we trust with our lives. At the end of the day, healthcare professionals are no less human than the patients they treat and, as such, they can fall victim to the darkest elements that are so deeply engrained in mankind.”

When you think about this thoughtful analysis of human nature, it’s both frightening and fascinating. Alec Olivia’s insight helps us understand how and why those we trust can do such heinous things, and sets the framework for the stories in the book.

Bad Medicine shares five spine-tingling tales about some of the most deplorable healthcare workers who ever lived. Instead of living by the “do no harm” creed, they were enticed by greed, dishonesty, and cruelty. The book makes it clear that the majority of healthcare workers sustain their oath resolutely, but there are always exceptions. The author does excellent work to tell these frightening stories with rich detail that will send shivers down your spine.

The Unforgiven: The Untold Story of One Woman’s Search for Love and Justice by Edith Brady-Lunny and Steve Vogel

Award-winning journalists Edith Brady-Lunny and Steve Vogel take readers on a haunting and tragic journey in The Unforgiven. This True Crime story reminds us that the line between murder and accidental death is not always clear. The devastating deaths of three children forever changed a central Illinois community, and raised troubling questions about the criminal justice system.

Amanda Hamm was in the car with her boyfriend and three children. As her boyfriend drove, the car slipped into an Illinois lake. The three children did not survive the accident. But was it an accident? This book dives into that very topic – and whether it actually was a harrowing, murderous plot.

The outcome of the investigation remains controversial. In this book, the co-authors cover the case from start to finish, beginning on the night of the drownings.

These veteran journalists do an excellent job recounting this unspeakable tragedy, and shine a light on the state’s controversial web of justice – as the story transcends Amanda’s three lost children. After reading, you’ll come to understand how the criminal justice system handled this exceptional case. By journeying through the book and the tragedy it shares, you’ll also grasp just how certain decisions can change people’s lives forever. This real-life event should never be forgotten. Told with incredible detail, this is an absolutely riveting book that must be read if you’re a fan of True Crime.